During the Reagan administration, CIA Director William Casey and Robert Gates, who held several key positions at the agency, were the “Gepetto and Pinocchio” of U.S. intelligence, according to former CIA senior analyst Mel Goodman. To Goodman, Casey and Gates oversaw a politicization of the intelligence process that was detrimental to U.S. interests and was merely a rationalization for Reagan’s massive military buildup, at a time when the CIA knew, even before glasnost and perestroika, that the Soviet Union could not compete with the US in the arms race.

That was just one of Goodman’s insights as he discussed his new book, Whistleblower at the CIA: An Insider’s Account of the Politics of Intelligence, at Santa Fe’s Collected Works bookstore. Joining him in front of a standing-room-only crowd was Valerie Plame, a recent transplant to our fair city and the victim of intelligence politicization herself. You might recall that during the George W. Bush presidency, she was “outed” as a CIA operative by the Bush administration for having the misfortune of being married to a former US diplomat who spoke out against some of Bush’s rationale for the war in Iraq.

Plame began by asking Goodman, why this book now. He said he was concerned about the ongoing political damage caused by ideologues running the country’s intelligence apparatus. He had seen firsthand how they “prostitute the intelligence process” by shaping their reports to fit a president’s desired political outcome.

During the 1980s, Goodman was a Soviet analyst who watched Gates and Casey play loose with the facts to satisfy Reagan. Goodman eventually quit the CIA in 1990 and turned whistleblower the next year. He spoke out against Gates’s nomination to lead the CIA and detailed the many ways the agency, under his and Casey’s direction, had cooked the books when it came to intelligence reports. One example, which Goodman did not discuss at Collected Works, was the assertion that the Soviet Union was behind the plot to assassinate Pope John Paul II. Gates and Casey were convinced from the outset that the KGB had arranged it, even as CIA analysts could not find clear evidence of this. In 1985, Casey ordered Gates to prepare a new report on the assassination attempt, and Goodman testified to Congress that Gates did not want analysts to include any information that might show the Soviets were not involved. Gates later rewrote some of the report to suit his interpretation of events.

Plame asked Goodman about more recent whistleblower cases, including Edward Snowden, Chelsea Manning, and Thomas Drake. The last name might not be familiar to many readers, but he was charged with violating the 1917 Espionage Act after the Obama administration accused him of passing along classified information to the media.  As Goodman noted, Drake tried to follow established procedures for alerting his superiors about illegal activities at the National Security Agency, where Drake worked. Only when he was ignored did he become a whistleblower.

As far as Snowden and Manning, Goodman said he thought they had released more information than was germane to their concerns, but he still supported their actions. Asked why Barack Obama was so aggressive in pursuing these and other whistleblower cases, Goodman said that he thought the president might have felt intimidated by the military and intelligence communities for his lack of experience in their realms, so he wanted to appear tough.

Most of the discussion focused on a range of foreign policy and intelligence issues, and the challenges the country faces in those areas under Donald Trump. The president, Goodman said, is “the symptom of a much larger crisis,” and Goodman does not share the faith some media outlets seem to have in the strength of our democratic institutions in the face of the Trump onslaught. “The guardrails of democracy have been compromised,” Goodman said. While not challenging the intelligence community’s assessment of Russian involvement, in some form, in the 2016 election, he doesn’t see an impeachment coming out of the Mueller investigations. He didn’t rule out, however, some indictments over money laundering tied to the Trumps and the Russians. 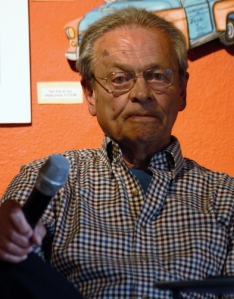 Going further into the previous election, Goodman noted that Vladimir Putin, in his KGB days, often collected information on Western elections. And as far as Hillary Clinton, Putin had a “real contempt” for her, after the way the United States handled the overthrow of Muammar Qaddfi in Libya. Russia abstained on a UN measure to send military forces there, because Clinton assured the Russians that regime change was not part of the plan. While Putin hated Hillary, he also thought he could work with—or manipulate—Trump, hence the Russians’ clear preference in the race.

Of course, Russian distrust of the United States began soon after the collapse of the Soviet Union, when Bill Clinton broke the US promise not to expand NATO into any former Soviet republics. Other promises were broken as well. Goodman said, “We need a better relationship with Russia,” so we can work with them on issues where we have similar interests, such as terrorism. But anti-Russian/Soviet feelings here have 100-year-old roots, and the recent charges of collusion have only fanned them. Goodman said Putin wants Russia to be seen as equal of the United States  in international affairs, and some of the moves he makes that upset Americans are really done out a sense of weakness—and the memory of the broken promises since 1991.

Other random observations Goodman shared: Current UN ambassador Nikki Haley is “incompetent,” and he had nothing positive to say about CIA director Mike Pompeo. or the recent push, under both Obama and Trump, to have former military men holding so many national security positions. Goodman said the left wing can be as bad as the right in accepting conspiracy theories, and he doesn’t believe there is a “deep state” trying to undermine Trump or any other president. The CIA in particular, he said, “is in no position to hold back any president.” Asked to cite some past intelligence successes, he said the various departments provided good information on Soviet weapons programs and had the tools to successfully monitor and verify SALT and other arms limitation pacts. And Richard Nixon’s ability to improve relations with the Soviet Union and China rested in part on good intel. In general, Goodman said, our country’s intelligence-gathering capabilities are supreme. The problems have come with how the information has been used or misused, or with ill-conceived covert missions. One intelligence failure, though was 9/11. Then the commission that studied the attacks protected the CIA and President Bush in its final report.

Asked for good sources of information on what is happening in the world, Goodman singled out the New York Times, the Washington Post, the Wall Street Journal, and the Economist (a lineup sure to raise the hackles of some sectors of both the Left and the Right). In general, though, he said journalists are lazy, and they need to look deeper at something he sees as bigger problem than Russian meddling in the 2016 election: Republican Election Day shenanigans and ongoing efforts at voter suppression. Another thought on the previous election: Hillary Clinton was a flawed candidate, in part because of her decision to use a private email server while secretary of state. She compounded her problems by ignoring advice to campaign in Wisconsin, Pennsylvania, and other states she thought she had wrapped up—and then lost by small margins. And the Democrats as a whole underestimated the anger of the middle class and largely ignored its concerns.

In the midst of all the recent political chaos, Goodman singled out one person for praise: “Sally Yates is a hero of mine.” The former assistant attorney general is a model public servant, because she spoke up when she saw something illegal—which of course is what any good whistleblower should do.